Our School / History of Longridge 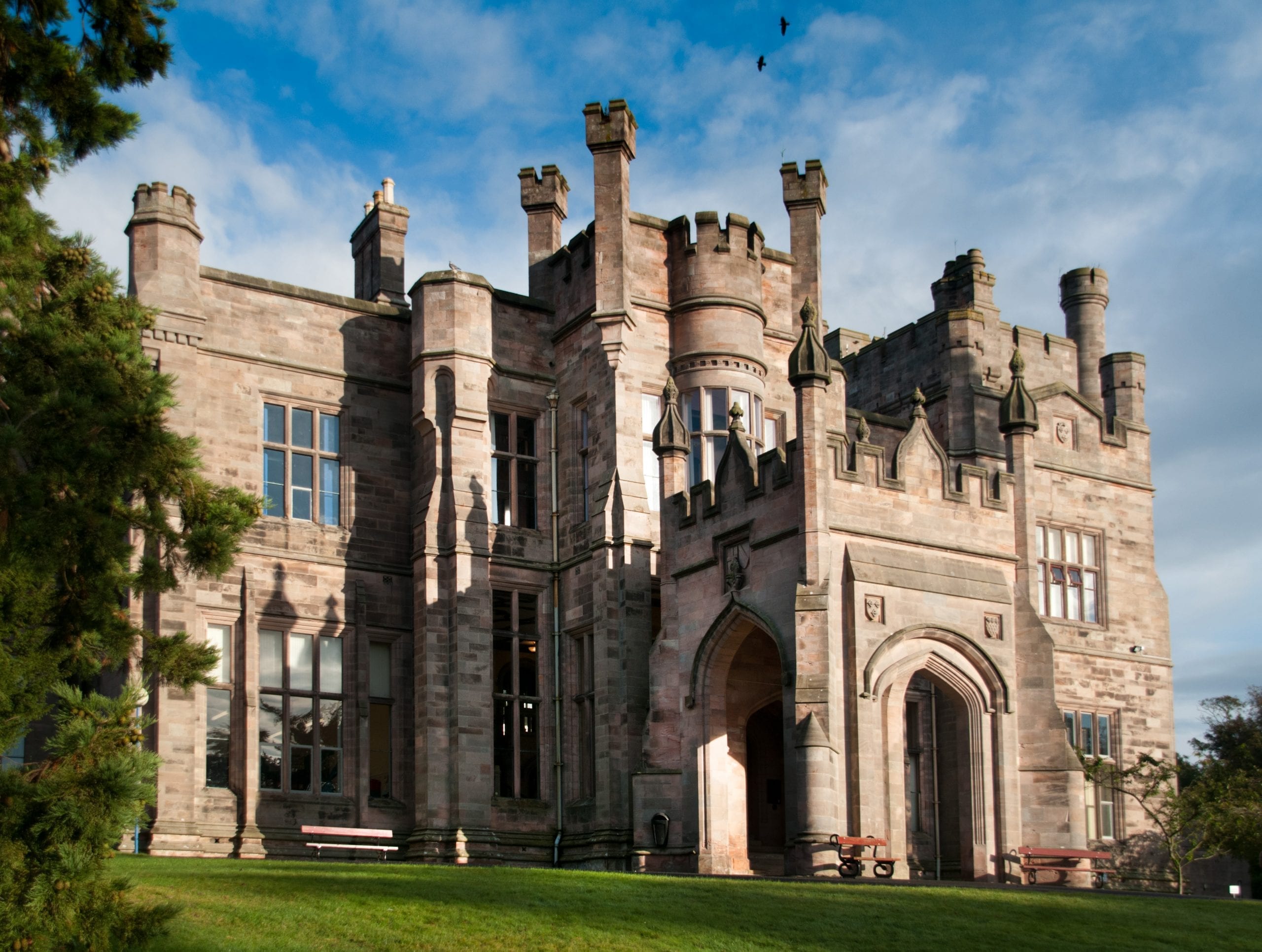 HRH The Duchess of Kent

The Duchess of Kent visits the school 23rd March 1993

We have been taking a look back to the period 1982-3, when a group of people came together and worked doggedly as a team to establish the new school at Longridge Towers.

There were a large number of people who contributed to the new school and attended many meetings, took difficult decisions, gave up time and finally succeeded in establishing the new co-ed school. We have spent time with four of those dedicated people, each one of whom had a vital role to play, and indeed still do. The following summary has been written using the verbal accounts of those early days, and fond memories, of Mr James Stobo CBE, Dr Michael Barron, Mr Jim Houston and Mr Ian McCreath MBE.

It had been quite a shock to parents to receive a letter from the Ursulines that St Mary’s Convent was to close. There wasn’t much time to find a new school, and parents wanted their children to stay close by.

A group of parents, together with several of the lay teachers from the convent, met at a coffee morning held by Morven Stone. Next, a meeting of all parents was called and Mr McCreath remembers that the majority of parents didn’t believe it could be done, but the group of enthusiasts firmly believed that there was a need for a private school in the area. The next meeting was small, but the steering committee forged ahead with plans for a new school to be set up on the same premises. What followed was a sequence of unique and sometimes lucky events which culminated in our school, which has grown over the years to become highly respected and successful in achieving a good education over the whole academic lifetime, for the “whole person”.

The emerging committee needed a strong and fair chairman, and Mr James Stobo stepped in to lead the meetings. One supporter even brought up friends from Winchester to give some guidance. After all, the group of parents and teachers had energy and enthusiasm, and professional skills in finance and law, but no experience of starting a school. Mr McCreath explored with the nuns, their plans for the Longridge Estate and was able to achieve an agreement to purchase. Mr Houston recalls that Mr Stobo was very enthusiastic about computers and they spent many hours poring over the convents’ accounts books trying to create a budget for a school. It was agreed that a neutral figurehead was required and Lord Home of the Hirsel was asked to take the role of President; he agreed and the next steps were taken. The property was purchased and portions of the land were sold off, complete with planning permission for dwellings. A new main entrance was created, and machines brought in to level the playing fields.  It was all hands to the deck and Mr Stobo took his turn on his knees, sifting stones out of the rugby pitch. In total some forty tons of stones were removed. Mr Stobo remembers that the purchase price included some fifteen pianos, all upright and rather shabby, so they were all sold off and one good grand piano was installed. Mr Houston chaired a fundraising appeal, which raised over £160,000 towards the initial set up of the school, easing the costs considerably.

In the meantime, an advert was posted for a Headmaster and Dr Michael Barron moved his family north to take up a role in a school which was not yet secure and only had 28 names on the roll. His determination and enthusiasm were immediately recognised and the family moved into Meadow House, a building formerly used to produce heating gas. Living on site had its ups and downs over the years, he says: he didn’t have far to travel to school or rugby matches, but was on call day and night after the governors “kindly” published his private telephone number! Indeed, Dr Barron says his wife knew as much about the school and pupils as he did, and was often stopped in town by parents.  Dr Barron remarked that; ‘They didn’t just hire me, they hired my wife too’. Dr Barron feels that this personal contact was a significant reason for the success of the school. Our other contributors all remarked that under Dr Barron’s leadership, the pupil numbers increased and the results improved. He was also instrumental in forging links with our friends around the world, particularly in Hong Kong, China, Germany and Spain, and encouraged children from our Armed Forces personnel to join the school community.

The initial financial and legal work was extensive, and local businesses gave their time and support to help develop the school. Sales of property, purchases of equipment, hiring of teachers, planning of the curriculum and classes were all important processes which kept the committee and probably their families, awake at night and very busy. Mr Houston and Mr McCreath worked tirelessly with the financial and legal aspects to achieve a stable, established school which attracted boys and girls from a wide area. One particular innovation was to run a fleet of school busses which could relieve parents of the school run. Another was that the school day was reorganised to include enrichment times – this extended the school day and therefore meant children were getting home a little later, enabling parents to work if need be. The Longridge Towers School Development Association was established by parents and has since worked tirelessly to support the school.

All agree that the Governors were fortunate to be able to recruit excellent teachers in those early days, some of whom are still guiding our current pupils. Indeed, the quality of teaching has been pivotal in enabling the school to become so successful.  There were many other willing people, who were part of the original group but are not listed here, and their spirit has continued throughout the last 35 years, with many serving as long term Governors.

Our thanks to Mr James Stobo CBE, Dr Michael Barron, Mr Jim Houston and Mr Ian McCreath MBE, not only for their warm memories but also for their tremendous work over the years. They all remain close to the school and hold Longridge in great affection, along with the rather quirky premises.

A chance meeting of two zealous people, committed to education, led to the eventual establishment of St Mary’s Convent in Berwick-upon-Tweed. Mr James Gillis had been sent to France to raise money to repair St Mary’s Chapel. He spent time with Abbe Louis Marie Baudouin who had founded a religious congregation foundation in France known as the Ursulines of Jesus.

It was in November 1888 that St Mary’s Convent was invited to make a foundation in Berwick; Mother Mary Bernard came to Berwick to discuss the matter with Father Smythe. The Sisters decided to buy a villa in Tweed Street, the view from it over the Tweed was beautiful, the house solidly built and with possibilities for extensions. The purchase was completed and on September 5th 1889 the first Sisters arrived. Mother Mary Clare joined them and on the 30th September was appointed Headmistress of the private Convent School. Some months later, Mother Mary Agatha took charge of the Elementary School. The opening ceremony was attended by local dignitaries including Lady Jerningham of Longridge Towers.

Lady and Sir Hubert Jerningham had befriended the school and regularly attended Prize Giving Day. Every year Sisters, Governesses, and Pupils were invited to a garden party at Longridge Towers and horse-drawn brakes were sent to collect them. The lawns were available for races – photographs of that time show a group on the front law, the Kindergarten and Juniors dressed in attractive sailor suits, the Seniors in white blouses and ankle length skirts. The idea that Longridge Towers would one day harbour both Convent and School never entered anyone’s head. The last of these events was in 1913, a year before Sir Hubert’s death. Lady Jerningham had died in 1902.

HM Inspectors advised that extensions were needed to the Convent and changes would have to be made for boarding. Coincidentally an advertisement appeared for the sale of Longridge Towers, a magnificent building with 150 acres of land, only recently used as a Hotel.  The Berwick house was put up for sale and a builder was able to start on the necessary alterations and repairs. Engineers were engaged to reinstall central heating, replacing the old radiators and pipes. In September the community attended their first mass in their new home. Meanwhile engineers continued with their work. A board over the room now called the Tower Parlour held the inscription “Cocktail Bar”. The Reverend Mother asked that the inappropriate sign be removed by the builders but beneath on the wall itself was another inscription, “Gentleman’s Snug”, and this offending phrase had to remain until the painters and decorators started.

The building, which had been the home of Sir Hubert and Lady Jerningham, is unusual; a central block and west wing, two storeys high, contain the largest rooms including the Library, Dining Room, and Drawing Room. Also the room originally intended for the Prince of Wales, later King Edward VII, who never did actually visit, had a secret safe built into the wall and hidden by a canvas door. The iron safe door was locked, the key lost, and then library shelving blocked it still further. Such a secret was worthy of a mystery story so the boarders invented a ghost, still affectionately known as the Green Lady, who roams around at certain times. The East Wing has four floors containing servant’s quarters, bedrooms, laundry, and a kitchen.

May 21st 1951 was the official opening of St Mary’s Convent Longridge Towers. All the important people of the area were invited. A former servant was present, very eager to tell a story – one day Lady Jerningham had just alighted from her carriage in front of the house happening to look up, she saw a little fair haired girl dressed in blue looking out of one of the windows. She asked for the child to be brought down, but although the place was searched, no child was to be found. Perhaps Lady Jerningham had the gift of foresight!

June 12th 1952, and the Feast of Corpus Christi, was celebrated with an outdoor procession which became an annual event until 1970. It was a moving and colourful sight to watch the long lines of girls in their blues dresses and white veils move slowly around making the surrounding fields resound with their singing.

In 1963, a fourteen year old boarder was drowned at Spittal. After this tragic accident the girls were no longer taken to bathe there. The Convent’s dream was to provide a covered, heated swimming pool in the school’s grounds. The dream was realised in October 1966 when the building was completed.

The future seemed secure but because of dwindling numbers and fewer aspirants to the religious life, the higher authorities of the Order decided that one large Convent must close. St Mary’s Convent, Longridge Towers was chosen, put up for sale, and sold in 1983 to a Charitable Trust formed mainly by parents of the pupils of the school. When the Convent closed, the Sisters numbered twenty three. The teachers numbered eleven with just one man, Mr S Hall who taught mathematics. Some of the teachers stayed on to help with the formation of the new Longridge Towers School.