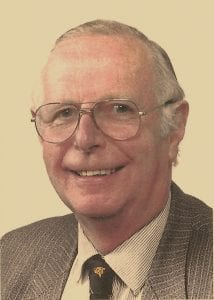 Longridge Towers School Director 1982-2000, James Stobo was Chairman of the initial group of parents and teachers who decided to start a new school at Longridge Towers in 1982. He played a major role in establishing the school; assisting with marketing, employing staff and obtaining financial support. Today, James Stobo remains an enthusiastic supporter of the school and is always welcomed to Christmas Concerts, Sports Days and Founder’s Days.

Fortunate to be engaged in a business from which he derived great pleasure, he has enjoyed his many roles in agriculture, both as farmer and advisor. James Stobo has been involved in livestock breeding for most of his life. In 2002, he produced an Aberdeen Angus bull that went on to be stud sire in the pedigree herd at Cheeklaw, Duns. He also successfully bred Border Leicester and British Vendeen sheep flocks.

James Stobo was invited to become one of the initial four Trustees of the Castle of Mey Trust, and served from 1996–2011. Her Majesty Queen Elizabeth the Queen Mother was herself a breeder of champion Aberdeen Angus bulls, and her herd continues under the stewardship of HRH Prince Charles, as the Prince’s Foundation is now the major Trustee. Indeed, in roles as President or Chairman, Mr Stobo has been privileged to spend time with several members of the Royal Family, particularly Her Majesty Queen Elizabeth, the Queen Mother during her long association with the Royal Smithfield Show. She was President of the Show and Vice-President of the Royal Smithfield Club. The Prince of Wales, Prince Charles was also Vice-President, and the Duchess of Kent attended shows and club dinners.

The outbreak of war gave domestic agriculture a new significance. British agriculture received a new impetus and sense of direction, acres were ploughed which had previously been grazing.

James Stobo was raised on a farm in Western Scotland, and has witnessed great change during his career. New techniques and new machinery helped in this second Agricultural Revolution. He boarded at the Edinburgh Academy in 1944 and developed a life-long interest in photography. His education was cut short when his father took ill, leaving the sixteen-year-old Jim to market the year’s grain crop. After that, his education began in earnest at home, farming.

My father had ordained that I should learn to do all things on the farm and that by so doing I should be in a position that I never asked any employee to perform a task that I could not do myself.

In 1945 he purchased three Border Leicester ewe lambs which, over the years, established the line from which all his flock was descended. The flock, on two occasions, produced record priced shearling rams sold at Kelso. As his own shepherd Mr Stobo soon found that sheep herding is easier from a dry cab.

In the mid 1950s, a pedigree Aberdeen Angus herd was established. Prestigious prizes were won, and Jim played an increasingly major role in the breeding of his cattle and sheep. On his thirty-fourth birthday, he spent the day as the judge of the Cattle Champions at the Royal Smithfield Show, at the time, the youngest judge to be accorded that honour.

In addition to his passion for animal husbandry, he worked on behalf of the farming industry in negotiations with Government on subsidies and payments under the Farm Price Review. He was President of the National Farmers Union of Scotland at the time of accession to the EEC.

In 1968 Jim was invited by the Department of Agriculture and Fisheries in Scotland, to be their nominee on the Board of the Animal Diseases Research Association, a farmer’s organisation set up to research the diseases which had been ravaging herds and flocks, and other animals such as horses. He worked with the Moredun Foundation for Animal Health for thirty-two years on the board, twenty-two years as Chairman. During this time, he worked with the honorary presidents, the Dukes of Buccleuch. In 1982, a new Biochemistry Unit was opened by Her Majesty the Queen. As Patron, the Princess Royal was attending a meeting just as the BSE news broke.

In 1974 he became Chairman of the new marketing team, the Scottish Quality Beef and Lamb Association, attending a meeting which set about promoting Scottish beef and lamb, including television advertising. James Stobo has held many important positions in leading and influential organisations, including:

Another fascinating and exciting phase of my life began in 1983…

In 1983, Mr Stobo and several other parents agreed that there was a need for Independent education in the area, following the notification that the St Mary’s Convent at Longridge Towers was to close.
We embarked on a steep learning curve about education and I was invited to Chair the Steering Group and subsequently to be the Chairman of Governors of the new Longridge Towers School.
Little wonder then, that this experienced, energetic man was so important to the emerging new independent school at Longridge Towers. His influence and steady wisdom have supported the school ever since those early years, and he continues to be held in very high esteem by us all at Longridge.