Our School / History of Longridge / HRH The Duchess of Kent

HRH The Duchess of Kent 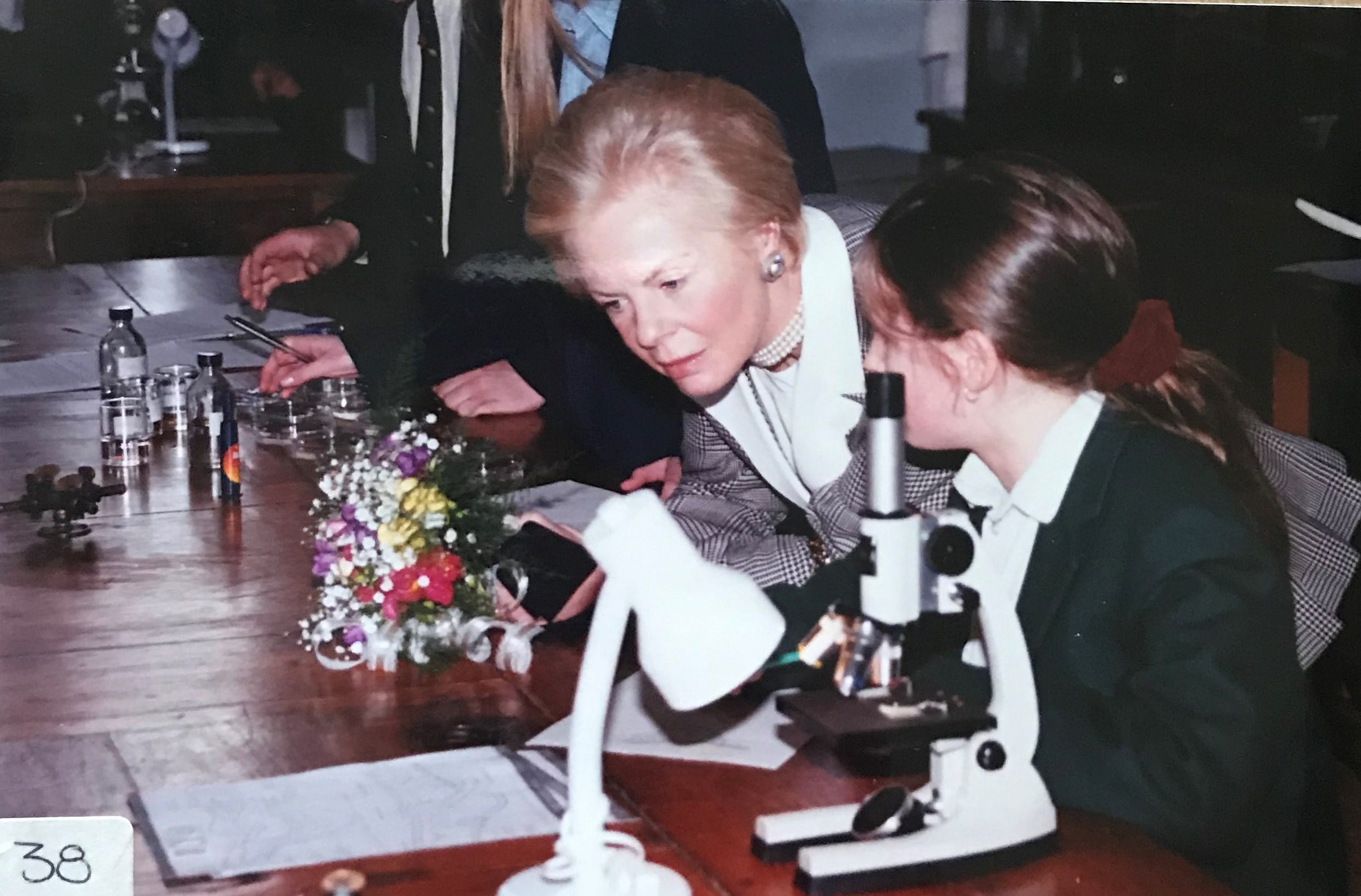 The Duchess of Kent visits the school 23rd March 1993

In 1993, Longridge Towers School was honoured by the arrival of the Duchess of Kent, to formally open the new Sports Hall. The special day was carefully planned to the minute, and the Duchess was able to see most of the school, and more importantly, talk with many pupils. The Duchess has played a very active role in the Royal Family, and carried out many duties in the years before the Queen’s children came of age and could take over some of those duties. Her energy and enthusiasm were evident during her time at Longridge Towers, and all who met her will remember her with affection and respect. We were very fortunate indeed, to be visited by such an important member of the British Royal Family, and we are proud to have had this special association.

The opening of the Sports Hall provided a marvellous new facility which is used to capacity today. As well as being a top-quality space for a wide variety of sports, it has been the venue for many enjoyable functions, such as the annual Sixth Form Snowball at Christmas and the end of year Summer Ball. It can also be hired for private functions. 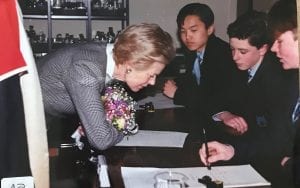 The Duchess, Katherine, was born in 1933 and married Prince Edward, Duke of Kent in 1972. (Prince Edward is a first cousin of Queen Elizabeth II. His brother is Prince Michael of Kent, and his sister is Princess Alexandra, The Honourable Lady Ogilvy). The Duchess of Kent is the only Royal Family member who is entitled to use HRH, but has decided not to. Her life has been full, and her giving nature recognised by so many well-known, and some not so well-known, organisations.

The Duchess of Kent is passionate about the power of music, and particularly the positive impact that music can have on young people. In 2004 she founded a charity, Future Talent, which aims to give every child an equal opportunity to excel in music. She is quoted as saying: “Being able to share and pass on your love of music to children is the greatest privilege a teacher can have.” She plays the piano, violin and organ. The Duchess of Kent is an ambassador for Aldeburgh Productions in Suffolk and was for 35 years, the President of the Royal Northern College of Music (Manchester). She was also a Trustee of the National Foundation for Youth Music (London).

She has been a long-term supporter of tennis, presenting the prizes at Wimbledon, and is patron of many organisations including:

Many hospitals, and special units around the world bear her name. She has been a volunteer for the Passage Night Shelter for the homeless, which was founded by Cardinal Basil Hume. 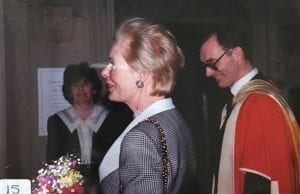 As you would imagine, it was a memorable and happy day. The Duchess’s itinerary had been carefully worked out so that she would be seen by every pupil as she toured the school, although I hadn’t allowed quite enough time for her stopping to talk with numerous children as she went round.

The visit ended with a tour of the Pre-Prep Department where Lord Ridley, the Lord Lieutenant of Northumberland, asked one of the four-year olds what he had enjoyed most about the visit.  He replied without hesitation that meeting George had been the highlight. A teacher then pointed out that George was the Police sniffer dog who had been round the building the previous day searching for explosive devices!

Royalty, a day off lessons, sniffer dogs as well as marksmen on the roof – what was not to like about such a special day?

The Visit of a Duchess

I remember the day well. Getting the boarders out of bed and dressed that morning was an easy task and the shine on their black shoes had been perfected over the weeks previously. I should add that several parents had sent new shoes to their child with the instruction that they were not to be aired until the day. I too had a new suit bought from Hepworths store the week before.

The instructions were clearly set out in assembly the previous day by the then Deputy Head Audrey Conway. If the Duchess spoke to any individual, she had to be addressed as Ma’am……it rhymes with jam. No child should dare to walk/run in front of the Duchess, and when the Deputy heard coughing in the assembly that morning, we were told not to cough at the unveiling of the plaque, instead we had to take a deep breath and swallow. This doesn’t work, but I used that line for many years thereafter. No one coughed on the day. 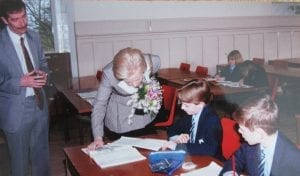 I taught in G12 in 1993, which had not yet been subdivided. After coming through the front door, she turned right and there she was. Confronted with the Duchess I remembered to address her in the correct manner and she smiled, as she did during the entire visit. G12 was the room where one of the best photographs of the Royal visit was taken. In it was Emma Jane Marshall and Sarah Taylor working from their Age of Invasions book. After she left, my heart returned to its normal pace, and of course the children were too excited to do any more work. The lesson was over, but the memory lingers to this day.

She ate lunch in the Concert Hall. On her table were staff whose names had been drawn out of a hat to sit beside her. Michael Barron was not at the table, and stood by me as he watched carefully what was going on. His blood pressure shot up when I told him to rescue her quickly, as Mr. Rowett had produced his postcard collection. Mr. Rowett had not done anything of the sort, but it made Dr. Barron smile and relax. It still makes us chuckle to this day.

At the end of the Duchess’s visit I spoke with Mr. Stobo, and he remarked that the children had gone home happy that night, but it is the memories of the day that will probably live with all of us for the rest of our lives.